The English Governess at the Siamese Court 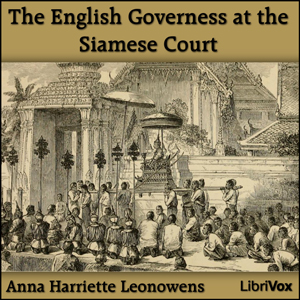 The English Governess at the Siamese Court

LibriVox recording of The English Governess at the Siamese Court, by Anna Harriette Leonowens.
Read by Sibella Denton and Kristine Bekere.

In 1862 Anna Leonowens accepted an offer made by the Siamese consul in Singapore, Tan Kim Ching, to teach the wives and children of Mongkut, king of Siam. The king wished to give his 39 wives and concubines and 82 children a modern Western education on scientific secular lines, which earlier missionaries’ wives had not provided. Leonowens sent her daughter Avis to school in England, and took her son Louis with her to Bangkok. She succeeded Dan Beach Bradley, an American missionary, as teacher to the Siamese court.

Leonowens served at court until 1867, a period of nearly six years, first as a teacher and later as language secretary for the king. Although her position carried great respect and even a degree of political influence, she did not find the terms and conditions of her employment to her satisfaction, and came to be regarded by the king himself as a rather difficult woman.

In 1868 Leonowens was on leave for her health in England and had been negotiating a return to the court on better terms when Mongkut fell ill and died. The king mentioned Leonowens and her son in his will, though they did not receive the legacy. The new monarch, fifteen-year-old Chulalongkorn, who succeeded his father, wrote Leonowens a warm letter of thanks for her services.

By 1869 Leonowens was in New York, and began contributing travel articles to a Boston journal, Atlantic Monthly, including ‘The Favorite of the Harem’, reviewed by the New York Times as ‘an Eastern love story, having apparently a strong basis of truth’.She expanded her articles into two volumes of memoirs, beginning with The English Governess at the Siamese Court (1870), which earned her immediate fame but also brought charges of sensationalism. In her writing she casts a critical eye over court life; the account is not always a flattering one, and has become the subject of controversy in Thailand; she has also been accused of exaggerating her influence with the king.”